Located on the west side of the Thames River in Connecticut, Montville is one of 21 towns in New London County, approximately halfway between the cities of Norwich and New London. Montville is a vibrant and growing community that consists of the villages of Chesterfield, Mohegan, Oakdale, and Uncasville. The Mohegan Sun Resort Casino is a major factor behind the recent growth and development here. The Mohegan Tribal Nation has lived in this area for centuries. The Mohegan Reservation – which is considered to be a sovereign nation – is within the borders of Montville. The Mohegan Sun Casino Resort opened in 1996.

Originally, Montville, along with Groton and Waterford, was a part of New London. Settled in 1646 under the name of Pequot, so named for the Pequot Indians, New London changed its name in 1658. Montville, including part of what is now known as Salem, was called the North Parish of New London, becoming Montville and being incorporated as a town in 1786. Waterford became a separate incorporated town in 1801 and Salem, from parts of Lyme, Colchester, and Montville, in 1819.

The Indian population in Connecticut remained relatively pure until a new group, the Mohegan – Pequot, moved to the area from what is now New York just before the arrival of the first colonists in the seventeenth century. These new Indians had the greatest impact on the settlers. Under the leadership of their Sachem Sassacus, the Pequots were hostile to the colonists, while on the other hand, the Mohegans, under their Sachem Uncas, were friendly, and eventually, the two, Mohegans and colonists, banded together and inflicted a destructive defeat upon the Pequots. Following this help from the settlers, Uncas and his chiefs became most liberal in giving away and selling land to the newcomers, especially here in Southeastern Connecticut.

The first grants of land in Montville were made to Richard Haughton and James Rogers in 1658, consisting of farm sites on the banks of the Thames River at Massapeag and Pamechaug. The first settler was Samuel Rogers, in 1670, followed by others, and the Indians appeared seemingly disposed to cede more and more of their acreage. Open fields were few and mostly small, and it became quite a chore for the settlers to clear more fields out of the tough, rocky, virgin soil, mostly covered by dense forests. Yet, it is a historical fact that these colonists eked out a living.

The industrial background of Montville is full of changes. Except for sawmills, the first manufacturing enterprise was the making of bog ore into iron. At the time of Montville’s incorporation as a town, there were four gristmills, seven saw mills, and one fueling mill. Shortly thereafter, a number of small factories moved into town. Woolen cloth, cotton textiles, and paper products became profitable. Going in and out of business were oil mills, dye works, distilleries, bicycle works, silk mills, and factories for the production of cotton batting twine, rope, and wooden wheel clocks. Each enjoyed a certain amount of prosperity for a time.

By 1870, there were thirteen manufacturing firms along the banks of the Oxoboxo River, employing from 10 to 85 employees each. However, business for these and subsequent concerns was always uncertain, with plants changing hands and occupations several times. This has been true right down to the present century, although fairly stable today.

Sidney E. Frank (1919-2006) was a billionaire businessman who helped to make the brands Grey Goose vodka and Jagermeister famous.
James Hillhouse (1754-1832) was a former US Senator, CT Congressman, and Treasurer of Yale University, and New Haven Real Estate Developer.
Ned Hanlon is a member of Major League Baseball’s prestigious Hall of Fame. 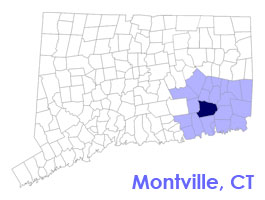