Before English settlement, nearby tribal people called the site of New London by a name the English spelled “Nameaug”. John Winthrop, Jr. led the first English to settle there in 1646, making it about the 13th modern Connecticut town settled by colonists; they informally named it Pequot (from the name of a tribe). The Connecticut legislature wanted to name the town “Faire Harbour,” but the citizens protested, declaring that they would prefer to be called Nameaug to Faire Harbour. The legislature relented and the city officially took its current name on March 10, 1658.

Prior to the Battle of Groton Heights, New London was burned by the loyalist Benedict Arnold in the attempt to destroy the colonial privateer fleet and storage of goods and naval stores within the city. The main defensive fort for New London, Fort Griswold, located across the Thames River in Groton, was well known by Arnold who sold its secrets to the British fleet so they could avoid its artillery fire.

Connecticut’s independent legislature, in its January session of 1784, made New London one of the first two cities brought from de facto to formalized incorporations. 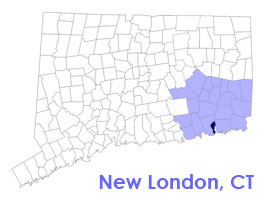