In the mid-17th century, John Eliot, a Puritan missionary to the Indians, established “praying towns” where Native Americans took up Christianity and were expected to renounce their religious ceremonies, traditional dress, and customs. One Praying town, called Wabaquasset (Senexet, Wabiquisset), 6 miles west of the Quinebaug River in present-day Woodstock, was the largest of the three northeastern Connecticut praying towns.

In 1675, when King Philip’s War broke out, some of the town’s Indians sided with the Mohegans and the English while others sided with the Indians led by Philip, rallying to arms on what is now Curtis Island in present Sturbridge, Massachusetts. During the war, the Praying town became deserted, and the English with their Indian allies marched through Woodstock to present-day Thompson in the summer of 1676 burning any crops or stored corn they could find.

In 1682, Massachusetts bought a tract of land, which included Woodstock, from the Mohegans. A group of 13 men from Roxbury, Mass. settled the town in 1686 and named it New Roxbury. Judge Samuel Sewall suggested the town change its name to Woodstock in 1690, and in 1749 the town became part of Connecticut. Woodstock is a rural and picturesque town. There are many lakefront properties on; Lake Bungee, Roseland Lake, and a Scout Camp on Black Pond.

The historic Bowen House (also known as Roseland Cottage) is located here. Bowen House is a Gothic Revival-style summer house built in 1846 by publisher Henry Bowen. The Bowen House has hosted many US Presidential visits. The home is now open as a museum. It houses one of the oldest indoor bowling alleys in the US. Areas of present-day Woodstock include; North Woodstock, East Woodstock, Woodstock Valley, West Woodstock, Kenyonville, and Harrisville. 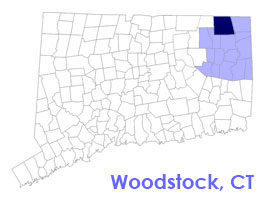