A small party of settlers from Plymouth, Massachusetts, founded a trading post at Windsor after the Podunk Indians invited them to provide a mediating force between other tribes, and granted them a plot of land. After Edward Winslow from Plymouth inspected the site, William Holmes led a small party there. This initial group arrived at Windsor on September 26, 1633, settling at the confluence of the Farmington and the west side of the Connecticut Rivers. They were about 50 miles up river at the end of ship navigable waters and above the Dutch fort at Hartford. They were in a good position to trade with the Indians before the Dutch.

More settlers arrived in 1635 led by the Revs Maverick and Warham with about 60 people who trekked overland from Dorchester, Massachusetts where they had first settled after coming on the ship “Mary and John” to the New World from Plymouth, England in 1630. More settlers from Dorchester moved to Windsor in the next few years. Outnumbering the original settlers they soon displaced the original Plymouth settlers, who mostly returned to Plymouth. Native Americans referred to the area as Matianuck. Reverend Warham renamed the settlement Dorchester in 1635. In 1637, the colony’s General Court changed the name to Windsor.

Windsor’s name is believed to be named after the city of Windsor England on the Thames River. Windsor is believed to be a corruption of the Saxon words ‘windlass Oran’ meaning a bank of a river with a windlass. The name of Windsor derives from Windlesore, or ‘Winding Shores’ where boats were pulled by windlass (‘windles’) up the river. As with all such names that date back many centuries, there are other claims as to the derivation of the name. It has also been thought that the name derived from ‘winding’ meaning ‘meandering’ shores. A third school of thought stemmed from the belief that the name derived from ‘a sore wind’ referring to the wind that blew across the mound upon which Windsor Castle, England was built but this fails on chronological grounds. 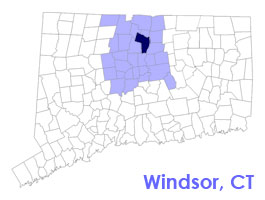