The town of Windham was incorporated on May 12, 1692. Mohican Sachem Chief Joshua willed the land to sixteen men, most of whom resided in Norwich. The land called Windham consisted of what is now the towns of Windham (which includes Willimantic), Mansfield, Scotland, Chaplin, and Hampton.

The town was named after Wyndham, England. On December 4, 1700, Windham’s first Minister, Reverend Samuel Whiting, was ordained. The church was a Congregational Church, stemming from the Puritans.

The first church building was erected shortly after on Windham Green. Early settlers were farmers who grew crops such as wheat, rye, corn, barley, flax, and hemp, as well as raised livestock. Early industry in Windham consisted of sawmills, gristmills, and blacksmith shops taking advantage of the water power from streams and rivers.

In 1823 Windham, along with Lebanon, Columbia, Chaplin, and Mansfield petitioned the General Assembly to become their own county. Tolland County, the last county formed in Connecticut, had just been formed a few years earlier, taking towns away from Hartford and Windham counties.

The town of Windham was no longer the center of Windham County. The courts and other government offices had been moved to Brooklyn which was more centralized and easier to travel to. All transportation was difficult due to the poor quality of the roads. The General Assembly denied the petition. 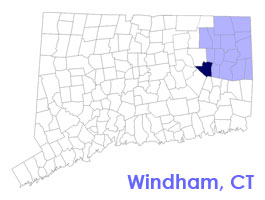