The first settlers, called the Proprietors, arrived in Norwalk in 1651 and owned 50,000 acres (200 km²) in common. On the outskirts of Norwalk’s settled area, the Proprietors were allowed private ownership of land in a common planting field, but cattle, sheep, and hogs were grazed in a communal pasture area. The outer limit of this pasture approximates Wilton’s present southern boundary.

By the end of the seventeenth century, the Norwalk Proprietors began to sell off the northern lands for settlement. The first non-Indian settlements in what is now Wilton were in the fertile lands of the Norwalk River valley and on the ridges of Belden Hill, Chestnut Hill, and Ridgefield Road. In order to till the lands, the settlers had to clear the forests and remove hundreds of glacial rocks, which became the stone boundary walls that we treasure today.

The families who bought land in Wilton did not have their own church and were required to attend service in Norwalk each Sunday. When demand for Wilton lands increased in the early 1700s, the Proprietors realized that the land would be worth more if Wilton settlers did not have to make such a long trek each week.

By 1725 there were forty families living in Wilton who wanted their own meetinghouse. Therefore, in 1726, with the approval of both the Proprietors and the Wilton settlers, a petition to the General Court in Hartford created Wilton Parish, “a village enjoying parish privileges” but still part of the town of Norwalk. A copy of the petition is framed and on display in the Town Hall.

The Wilton Parish, organized as an ecclesiastical society, dealt with many problems of a secular nature as well. It dealt with such things as communal flocks, pounds for animals, and the regulation of the trades and taverns. The state of the roads was a constant source of comment in the society meeting, as was the inevitable subject of taxation. Although the village parish did not have the right to send a representative to the state legislature, it did have complete charge of both local education and military training. The first minister, Mr. Robert Sturgeon, was also Wilton’s first schoolmaster.

As soon as the first meetinghouse was built in 1726, Wilton had a “center” of town, although other areas such as Belden Hill, Drum Hill, Pimpewaug, and Chestnut Hill had already been settled by self-sufficient farmers. By 1738 the first meetinghouse had become too small, and a second was built on the corner of Sharp Hill Road. Less than sixty years later, this second meeting house had fallen into such disrepair that a third church was built in 1790 on Ridgefield Road where it still stands as the oldest church building in Fairfield County, Connecticut. 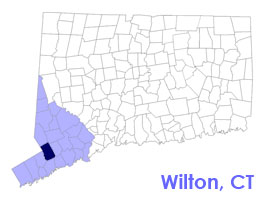