Although colonists settled along the Saugatuck River in 1639, Westport was officially incorporated as a town in 1835 with land taken from Fairfield, Weston and Norwalk. For several decades after that, Westport was a prosperous agricultural community, which distinguished itself as the nation’s leading onion-growing center. Westport’s Compo Beach was the site of a British expeditionary forces landing, in which about 2,000 British soldiers marched to Danbury and razed it. They were attacked on the way and attacked upon landing by Minutemen from Westport and the surrounding areas. A statue of a Minuteman, rifle in hand, is located near Compo Beach. The statue has its back towards the beach to symbolize the Minutemen’s strategy of waiting for the British to land and then attacking them from behind.

It wasn’t until after the turn of the century that Westport gained a reputation as an artist’s colony and cultural center. While Westport still retains its cultural roots, the town is no longer an artist’s colony. Despite the small-town charm, Westport is a thriving business center and home to approximately 15 corporate headquarters and more than 660 retailers. 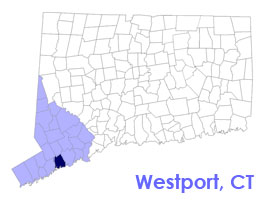