The tract now comprising the towns of Kent and Warren was sold at auction at the court house in Windham, in March, 1738. The settlement commenced the same year. The town of Warren Connecticut was laid out in fifty-three shares. The principal settlers were from Colchester, Fairfield and Norwalk. Payne, Washburn, Wright, Ransom, and Platt, were from Colchester; the Comstocks were from Fairfield; and the Slausons, Canfields and Bassetts, were from Norwalk.

Warren, CT was incorporated, and vested with town privileges at the session of the Legislature in October 1739. The first minister was the Rev. Cyrus Marsh, ordained in May 1741. The settlement of Warren was rapid. In May, when Mr. Marsh was ordained, the church consisted of ten males only; but before the end of the year, there was an addition of fifty-three persons, male and female, principally by recommendations froth other churches.

Warren was formerly a part of Kent. Warren was incorporated as a town in 1786. It is bounded N. by Cornwall, E. by Litchfield, S. by Washington, and W. by Kent. Its average length from north to south is five miles, and its average breadth is about four miles and a half. The township is hilly and mountainous, and its rocks and soil are of a granitic character. The agricultural products are grass and some grain. Butter and cheese are made, and beef and pork are raised by the inhabitants. The town is watered by the Shepaug, a branch of the Housatonic. Raumaug Pond – also known as Lake Waramaug, a considerable body of water, is situated partly in this town, and partly in Washington.

Above All State Park is located here. This is a rural town with the Wyantenock State Forest encompassing hundreds of acres south of Warren Village Center. 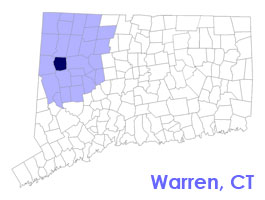