Trumbull was settled as a part of Stratford, Connecticut after 1639. The northern parts of present-day Trumbull were purchased from the Paugussett Indian Tribe in 1661 and 1662 by Stratford selectmen; Lt. Joseph Judson, Captain Joseph Hawley and John Minor.

By the early 1670s, all the land fit for planting around Mischa Hill, located in the Nichols section of Trumbull, had been surveyed and divided by the townsmen. The settler’s cleared the land by day and returned to the safety of their homes in Stratford village at night. They built barns to protect livestock and stone walls to establish property lines. This fertile area around Mischa Hill was commonly called Old Farms as early as 1700 in the Stratford land records.

In the early 1680s, the children of the original founding families of Stratford began to settle on their ancestral farmland along the Farm Highway, establishing a village separate from Stratford. Some of these large farms were a mile long. In 1683, Ephraim Hawley married and built a home on his father’s land called Captain’s Farm. In 1688, John Curtiss gifted his farm, at the time he called it “Mischa Hill”, to his son Benjamin. Zachariah Curtiss built his home before 1721 at “Old Farm’s” on land given to him by his father Captain William Curtiss. Ebenezer Curtiss received his land in 1699 that bordered near the farm that had been previously owned by Lt. Joseph Judson. Judson had removed to Woodbury, Connecticut in 1673 for religious reasons and his farm was sold to Abraham Nichols sometime before Judson’s death in 1690.

In 1725, the families residing at Mischa Hill, desiring to have their own meeting house, were given permission to form their own Parish named Unity and in 1730 they established the Unity Congregational Church. Others began settling in the areas of Trumbull now called Chestnut Hill, Stratfield, Trumbull Center, Long Hill, and Tashua. In 1744, the Parish of Unity and the Long Hill Parish of the Stratfield section of Stratford asked permission to combine and become the Society of North Stratford. The General Assembly in Hartford referred to the eastern boundaries of Unity at that time as ancient when they approved the new town in 1744. The name of the town changed to Trumbull in 1797 when the town was incorporated and local government was established. The new town was named after Jonathan Trumbull who served as an advisor to General George Washington during the American Revolutionary War and became Connecticut’s first governor. 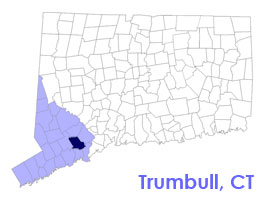