Torrington was originally settled in 1735 by Ebenezer Lyman Jr. of Durham, Connecticut. Its early settlers resided on the hills west of the Naugatuck River where the first school, church, store, and tavern were constructed. Later, the eastern hill known as Torringford was settled as it provided the best farmland for agricultural work. Torrington was given permission to organize a government and incorporate as a town in October of 1740.

The fast moving waters of the Naugatuck River were utilized as waterpower for early 19th century industries. Industrial growth skyrocketed in 1813 when Frederick Wolcott constructed a woolen mill. The mill attracted a large workforce and created a demand for goods, services, and housing.

From a postcard sent in 1906 Israel Coe and Erastus Hodges began the construction of two brass mills on the Naugatuck River in 1834. This event sparked the beginning of the brass industry in Torrington, which would later spread throughout the entire Naugatuck Valley. In 1849, the Naugatuck Valley railroad was completed which connected Torrington with other population centers, ending its isolation and stimulating further industrial growth. Soon, Torrington was producing a variety of metal products including needles, brass, hardware, bicycles, and tacks. Torrington’s growing industrial plants attracted English, Irish, and German immigrants throughout the 19th and early 20th century. Between 1880 and 1920, Torrington’s population exploded from 3,000 to 22,000 as immigration from southern and eastern Europe increased. During this period, immigrants included the Poles, Czechs, Slovaks, Italians and Lebanese. Torrington was charted as a city in 1923.

In 1955, a massive flood destroyed much of the downtown area and property in the region when Hurricane Connie and Hurricane Diane caused local rivers to overflow. Torrington is the birthplace of abolitionist John Brown. Getting to Torrington is easy. US Route 4 and US Route 202 meet in Torrington, as does Route 8. 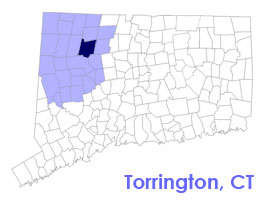