Settlement started in 1670, after Major John Pynchon, a fur merchant from Springfield, paid the Indians thirty pounds for a six-mile tract of land known as Stony Brooke Plantation. A thickly wooded area between Springfield and Windsor with a narrow meadow provided a land route connecting Springfield and Windsor. This route was called the Hampton Path (usually thought to include Hill Street, Remington Street, South Street, and possibly other roads).

The local Indians used this land primarily as a hunting ground and preferred camping by the Congamond Lake and Manatuck Mountain areas to the west. The Massachusetts General Court authorized Pynchon’s committee of Springfield men to settle a town on the “West side of ye River Connecticott towards Windsor.” They stipulated that in five years twenty families were to settle there and that a minister be maintained.

The town was carefully planned, reserving land for a common area in the center and space for a meeting house, school, and land for a minister. The first land was sold at four pence per acre. By 1675 three dozen families had settled, but they were forced to flee to Springfield during King Philip’s War. Returning and rebuilding after the settlement was burned, they were ready to retain their first minister in 1679.

For its first twelve years the town’s affairs were conducted by a Committee of Proprietors (land owners), who held the first town meeting on March 9, 1682. Attendance was compulsory for every property owner, and a two shillings and sixpence fine was imposed for inexcusable absences or tardiness. This first town meeting chose five selectmen, a town clerk, two highway surveyors, a land measurer, and a sealer of leather. No treasurer was elected because town tax was paid in grain. About that time a meeting house was built: the site is denoted today by a plaque on a large rock on the town green. By 1674 the town had taken the name Suffield, a corruption of Southfield.

The period between 1670 and 1740 was one of hard work, primitive living, and self-government regulated by the Fundamental Orders of the Congregational Church. Church and town government were one, with no deviation allowed until more liberal changes were demanded and the Second Congregational Church was organized in 1743. Soon after, Hartford County’s first Baptist Church was founded on Hastings Hill. Religious liberty and complete separation of church and state were finally guaranteed by the Connecticut Constitutional Convention in 1818. Between 1840 and 1890, Methodists, Roman Catholics, and Episcopalians established town churches.

After settling border disputes with neighboring towns, Suffield, which had been part of Massachusetts for 79 years, was granted admittance to Connecticut in 1749. The town prospered and produced a number of distinguished citizens who served the Town, Colony, and Crown. When the Western Reserve Lands were opened to speculators, some people, who felt that 1000 residents was a population explosion, moved west to New York and Ohio, while a significant number emigrated to Vermont. Residents were early supporters of the trade embargo against England and sent supplies and men to fight in the war for independence. Suffield’s contingent accounted for one-third of Connecticut’s militia. 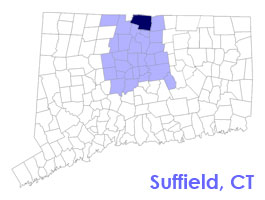