Storrs is a village located in the town of Mansfield and is named after the Storrs brothers. Charles and Augustus Storrs founded the University of Connecticut (UConn) in 1871 – it was originally called Storr Agricultural College.

The Town of Mansfield was incorporated in 1702. Mansfield was part of a tract of land acquired from the Mohegans by a group of settlers in Norwich. Most of the first settlers were farmers, and Mansfield has remained largely a rural town. Rivers powered sawmills and grist mills from the early days, and during the nineteenth century mainly textiles, but also steel products, bits and augers, bells, bronze cannons, gunpowder, and organ pipes, were manufactured in Mansfield. The first silk mill in the United States was built at Hanks Hill in 1810, and for many years, Mansfield led the country in silk production.

Today, Storrs is dominated by the presence of the main campus of UConn and the associated events. The Connecticut Repertory Theater is a professional theatre run by UConn’s Department of Dramatic Arts. The theater produces programs regularly. The Connecticut Repertory Theater is part of the School of Fine Arts. The University of Connecticut Storrs Campus is the flagship university for the State of Connecticut with a local student population of close to 17,000. U.S. News and World Report named the University of Connecticut (UCONN) as the number one public research university in New England, and in the top 25 in the nation. Famous CT people from Storrs include Peter Tork (ne Peter Halsten Thorkelson) of The Monkees. Peter attended E.O. Smith High School in Storrs graduating class of 1959. He also made the class of 2005 commencement speech. Another musician, Wendy O. Williams, lead singer for punk rock band the Plasmatics, lived in Storrs from 1991 until her death, in 1998. 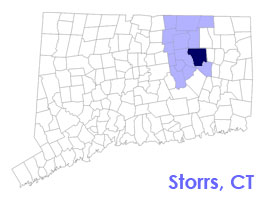