Stamford, Connecticut was known as Rippowam by the Native American inhabitants of the region, and the very first European settlers to the area also referred to it as such. The name was later changed to Stamford after a town in Lincolnshire, England. The deed to Stamford was signed on 1 July 1640 between Captain Turner of the New Haven Colony and Chief Ponus. By the Eighteenth century, one of the primary industries of the town was merchandising by water, which was possible due to Stamford’s proximity to New York.

In 1692, Stamford was home to a less famous witch trial than the well-known Salem witch trial, which also occurred in 1692. The accusations were less fanatical and smaller-scale but also grew to prominence through gossip and hysterics.

Starting in the late 19th century, New York residents built summer homes on the shoreline, and even back then there were some who moved to Stamford permanently and started commuting to Manhattan by train, although the practice became more popular later. Stamford was incorporated as a city in 1893.

A massive urban redevelopment campaign (starting in the 1960s and gaining steam in the 1970s) resulted in a downtown with many tall office buildings. The F.D. Rich Co. was the city-designated urban renewal developer of the downtown in an ongoing redevelopment project that was contentious, beginning in the 1960s and continuing through the 1970s. The company put up the city’s tallest structure, the Landmark Building, and the GTE building (now One Stamford Forum) along with the Marriott Hotel, the Stamford Town Center, and many of the other downtown office buildings. The Landmark Building will soon be dwarfed by two new downtown projects by the Rich Company in partnership with Cappelli Enterprises by the imminent start of construction of the 34 story Trump Parc condominium project and the 400 foot 39 story Ritz Carlton Hotel and Residences development. Over the years, other developers have joined in building up the downtown, a process that continued, with breaks during downturns in the economy, through the 1980s, 1990s and into the new century. 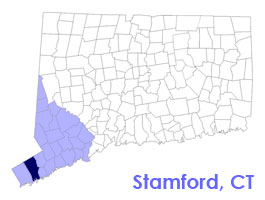