In 1659, Thomas Burnham (1617 – 1688) purchased the tract of land now covered by the towns of South Windsor and East Hartford from Tantinomo, Chief sachem of the Podunk Indians. Burnham lived on the land and later willed it to his nine children. Beginning in the middle of the 17th Century, a few of the settlers of Windsor, Connecticut, began using land on the east bank of the Connecticut River for grazing and farming purposes. By 1700, a number of families had made their homes in this area, now known as South Windsor. In 1768, the residents of the area were allowed to incorporate as the separate town of East Windsor, though the area was informally referred to as East Windsor before this time, which then included all of East Windsor, South Windsor, and Ellington. Known for its agriculture and shipbuilding, the town supplied more than 200 volunteers during the American Revolution. In 1786, Ellington became an independent town. South Windsor itself was incorporated as a town in 1845. Tobacco was a major crop grown in South Windsor since its founding. However, the town has industrialized and commercialized more over time.

Main Street, located near the Connecticut River and running North to South from the border of East Hartford to that of East Windsor, is the center of the town’s historical district. Wood Memorial Library, Ellsworth School, and the nation’s oldest continually operating Post Office are located on the street. Minister Timothy Edwards is buried in a cemetery located on Main Street and the town’s middle school is named for him. In 1698, Edwards became the first minister for the settlers on the east side of the river and his church was built on Main Street (in present-day South Windsor). His son, theologian Jonathan Edwards, was born in South Windsor (at the time still part of Windsor). Ulysses S. Grant stayed at a home on the street and John Adams wrote that he “spent the morning riding through Paradise” when he traveled through town (what was then part of East Windsor) in 1771.

The town has become less and less agricultural/rural since 1950. This former farming community has been transformed into a suburban town with industrial and commercial districts. The town’s population more than tripled between 1950 and 2000. In the early 1990s, residents mobilized against a proposed nuclear waste dump located near the East Windsor town line. They were successful in their drive to keep the town nuclear-free. 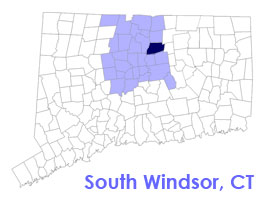