Although Southington was formally established as a town in 1779, its roots go back to a much earlier time. Samuel Woodruff, Southington’s first white settler, moved from Farmington to the area then known as Panthorne which was settled in 1698 (now recognized by Southington’s “Panthorn Park”). The settlement grew, prospered, and came to be known as South Farmington and then later, the shortened version, Southington.

Southington originally was a small rural farming community. In the early 1900’s, Southington developed as a manufacturing center, but still maintained a very small population of a few thousand residents. Some of the products invented there include cement that was able to harden under water, the carriage bolt machine, and a new tinware process. With the overall decline of industry in New England, and the construction of Interstate 84 in the mid-1960’s, Southington developed into a bedroom community of which the town saw explosive growth and a population that has surged to over 42,000 today. 28% of the workers in Southington are still employed in manufacturing, most of them in the production of fabricated metal and aircraft.

Each year, Southington is home to the Apple Harvest Festival, an effort to bring together local businesses and denizens from the area and surrounding cities. This has been a tradition of the town since 1968, generally spanning six weekdays and two weekends. Its highlights include a town parade, carnival rides and games, musical performances, and a wide selection of unique recipes and foods served by community cornerstones including the Boy Scouts of America, local churches, the Fire and Police Departments, the Southington Rotary Chapter, and the Southington Jaycees (Junior Chamber of Commerce), who provide leadership development through community service. 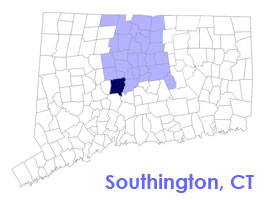