Somers was originally part of Enfield, Massachusetts. The settlement was known as “East Enfield” when it was founded in 1706 by Benjamin Jones, followed in 1713 by Edward Kibbe, James Pease, Timothy Roote, and John McGregory. The Town of Somers was incorporated in 1734 by the General Court of Massachusetts and named for Lord John Somers of England. In 1749 Somers separated from Massachusetts and was annexed to Connecticut.

Somers has always been an agricultural community with potato, tobacco, and dairy farms. The Four-Town Fair was organized in 1838 as a contest to see which of the ten school districts had the most oxen. “Little Sorrel”, the favorite horse of Civil War General “Stonewall” Jackson, was born at the Collins Farm on Prink Street, now Springfield Road.

Industries have included grist- and sawmills and bonnet-making. In 1839 the Billings Satinette Mill was established on the Scantic River. Rockwell Keeney purchased it in 1879 for a woolen mill. As the Somersville Mfg. Co., it was the main industry here until 1970. The State of Connecticut opened a state prison in Somers in 1963 and it remains open today. In 2007, Money Magazine named Somers 53rd on its Best 100 Places to Live In America. 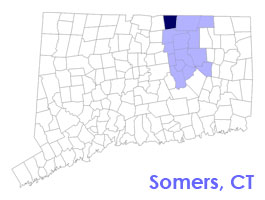