The first people to traverse the area to become Sharon were the nomadic Paleo-Indians and the Archaic Period Indians, who came into the area following the retreat of the glaciers. Well before the arrival of Dutch or English settlers, a substantial community of Native Americans occupied portions of modern Sharon. Their principal village stood on the eastern edge of Indian Pond, where they had cleared considerable acreage. Others resided in the valley of Ten Mile River (Webatuck Creek) and on a hillside overlooking Mudge Pond (now Silver Lake Shores). An age-old Indian trail connected Wechquadnach (Indian Pond) with Scaticook (Kent). Workmen constructing the Hotchkiss Brothers factory in Sharon Valley in the mid-nineteenth century uncovered an Indian burial site there.

Early Native American inhabitants belonged to the loose Algonquin confederacy and called themselves Matabesecs (part of the Mohegan tribe). As early as 1740 Moravian missionaries, including Joseph Powell and David Bruce, worked to convert these people to Christianity and achieved significant success. During the tense days of the mid-1740s when warfare raged along the northern frontier, New York’s governor moved to break up such activities. Bruce stayed on, however, to minister to his charges (d.1749). Powell moved to the west side of Indian Pond where he preached to a group of white settlers until 1774.

Sharon Indians transferred land to arriving immigrants, beginning in the 1730s, though disputes over these transactions persisted into the mid-1750s. In 1755 they relinquished any surviving property rights. A century later a great memorial service was held on the eastern shore of Indian Pond to dedicate a monument to the area’s early missionaries.

Sharon, CT borders New York to the west, Kent to the south, Cornwall to the east and Salisbury, CT to the north. Sharon CT hamlets and villages include; Ellsworth, West Woods, South Ellsworth, Skiff Mountain, and Pearson Corners. 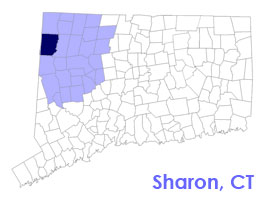