The area now called Salem Connecticut was originally inhabited by Mohegans. The very first settlement of European origin in present-day Salem (then part of the town of Montville) was deeded in 1664. In the early 1700s, more settlements appeared in what was then Colchester. During this time period, the area was called “Paugwonk.” The small neighborhood around the Gardner Lake Firehouse on Route 354 is sometimes still referred to by that name.

Because of the remote location of these settlements and the considerable distance to churches, the people petitioned the Connecticut General Court for a new parish in 1725. It was named New Salem Parish, in honor of Colonel Samuel Browne, the largest landowner at the time, who was from Salem, Massachusetts. Recent archaeological evidence suggests that Colonel Browne owned slaves. The people of New Salem strongly supported the Patriot cause in the Revolution.

Salem was incorporated as a Town in 1819 from lands of Colchester, Lyme, and Montville, with a population of approximately 1,200. Though remote during this period, populated almost entirely by farmers, the rocky and craggy land that constituted much of the town kept the population low and new settlement at a minimum. Salem has always been a crossroads town; the old Hartford and New London Turnpike (now Route 85) was a toll road, traveled frequently by legislators during the winters of the 19th century when the Connecticut River was impassable. The Turnpike provided stage coach service until the 1890s. 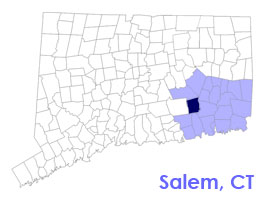