History of Ridgefield CT
Ridgefield was first settled by English colonists from Norwalk and Milford in 1708 when a group of settlers purchased land from Chief Catoonah of the Ramapoo tribe. The town was incorporated under Royal Charter in 1709. The most notable 18th Century event was the Battle of Ridgefield (on April 27, 1777). This Revolutionary War skirmish involved a small colonial militia force (the Connecticut Continentals, part of the Continental Army), led by, among others, General David Wooster, who died in the engagement, and Benedict Arnold, whose horse was shot from under him.

They faced a larger British force that had landed at Norwalk and was returning from a raid on the colonial supply depot in Danbury, Connecticut. The battle was a tactical victory for the British but a strategic one for the Colonials since the British never again attempted a landing by ship to attack colonial strongholds during the war.

Today, the dead from both sides are buried together in a small cemetery: “…foes in arms, brothers in death…” The Keeler Tavern, a local inn, and museum features a British cannonball still lodged in the side of the building. There are many other landmarks from the Revolutionary War in the town, with most along Main Street. 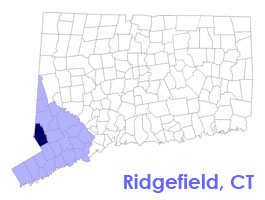