Welcome to the northeast Connecticut town of Putnam, CT. Putnam was incorporated in 1855, which separated it from Killingly, Pomfret, and Thompson.

The town was named in honor of Revolutionary War General Israel Putnam. Putnam was a key contributor in providing clothing and other goods to the Civil War soldiers. There were numerous mills and a train ran through the town, providing transportation for the goods being produced. 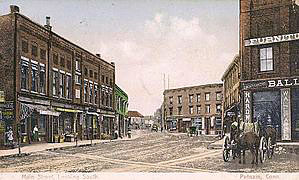 On Aug. 19, 1955, Putnam was devastated by floods resulting from torrential downpours caused by two hurricanes, which hit Connecticut within the span of a week. Hurricane Connie affected Connecticut on Aug. 13, dropping between four and six inches of rain across the state. Hurricane Diane soaked the state with 14 inches of rain on Aug. 18-19. The result was flooding in many of the state’s rivers, including the Quinebaug River. The resulting torrent of water destroyed homes, businesses, and factories. Floating magnesium barrels burst, lighting up the night. The railroad bed was washed away.

Famous Putnam residents include; baseball coach Bob Schaefer and baseball pitcher Rollie Sheldon, serial killer Michael Bruce Ross and actress Brooke Brodack. Historical Putnam landmarks include; the Putnam High School, the Putnam Railroad Station, and the Cady-Copp House. Today, Putnam is a popular CT Wedding and golfing destination. The beautiful Connecticut National Golf Club is located in Putnam. An unusual piece of Putnam history centers around an estate in Pomfret once called the Gwyn Careg Inn. According to legend at one time the estate owners kept an elephant as a pet. In order to accommodate the elephant, they constructed a special “elephant room” with several fireplaces to maintain adequate warmth in the winter. Apparently, a fire destroyed the room. It is not known what became of the elephant. To share Putnam, CT photos, information or to add your business, contact us. 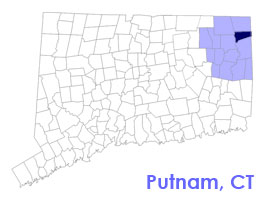 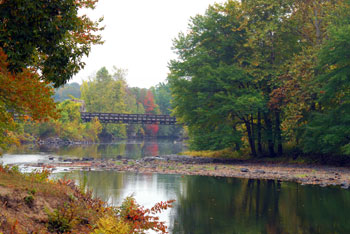 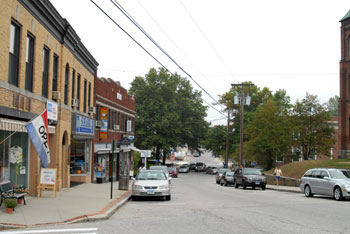 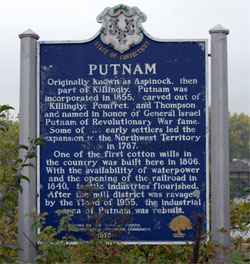