In 1687 a tract of land lying east of Norwich between Norwich and .Stonington (now North Stonington) was deeded to Capt. James Fitch, Capt Joshua Standish, Thomas Parks, Sr, Jonathan Tracy, Thomas Tracy, Joseph Morgan, and all the rest living in the towns bounds by Oanaco, chief Sachem of the Mohegans (son of Uncas). The town was called “New Preston” in the deed, named after an English town from which some families came. But the name shortly became just “Preston”.

At first, the northern boundary of the Preston was Plainfield. But in 1815, Griswold separated to form a separate town, reducing the size of Preston by about half. This is why many early Preston town records are found in Griswold. There also were other changes in the town’s eastern boundaries through the years.

Preston consisted of 3 populated areas and scattered farms. Each area, Preston City, Poquetanuck, and Long Society, were typical small New England villages, with services such as a blacksmith shop, a grist mill, and a store. Early trades practiced were tanning of leather, shoe making, silversmith, goldsmith, and clockmaker. Small industries existed, such as shipbuilding in Poquetanuck, a fulling and carding mill, and brick making along Brickyard Road.

As in most of colonial New England, the Congregational Church was the center of the religious, political, educational, and social activities of the town. The earliest church was established in 1698 in Preston City, followed by many other various denominations in Long Society, Poquetanuck, and Preston City. Schools were built in “districts” to serve the local children, until two central schools, one on Poquetanuck and one in Preston City were built between 1938 and 1940. 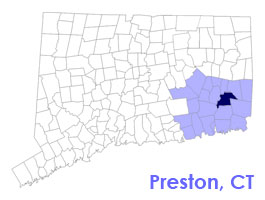 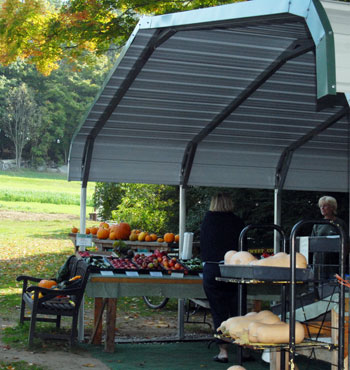 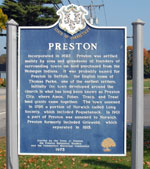