Pomfret, a rural community in Windham county, was purchased from the Indians in 1686. Major Fitch, acting as agent for Owaneco, and the purchasers arranged for the conveyance. The price was 30 pounds and was known at that time as “The Mashmuket Purchase”. Mashamoquet, the name first applied to the largest stream which runs through Pomfret, was signified by the Indians as a great fishing place. The area at that time was about 18,270 acres.

The first settler was probably Captain John Sabin who built a house in 1696. His home also served as an outpost against the Indians. The Mashamoquet Brook was a source of power for small mills which developed along it and its tributaries. The ruins of these mills and their dam foundations still exist along the brook. The written evidence of these mills is found in Pomfret’s land records. An example of one of these mills, the Brayton Grist Mill, stands at the entrance of Mashamoquet State Park on Route 44 and is open to visitors.
Pomfret is probably best known for the wolf’s den where General Israel Putnam killed the last wolf in Connecticut. Wolf Den is now maintained as a state park and has been placed on the National Register of Historic Places by the National Park Service.

The Mashmuket Purchase was incorporated by the legislature and called Pomfret in 1713. The name of the town was derived from the town of Yorkshire (Pontefrat, pronounced ‘Pomfret’) which was the English home of the family of Governor Saltonstall. In the ensuing years Brooklyn became a town, Hampton became a town and in 1855 Putnam became a town. All of these new towns took land from Pomfret. That portion lost to Putnam was by far the most damaging economically as it included a section known as Pomfretville or what today is known as the Cargill Falls. Pomfretville or Pomfret Factory was the industrial center of Northeastern Connecticut at that time.

Pomfret is a rural town of 40 square miles. The name “Pomfret” was derived from the town of Pontefract in West Yorkshire, England.

There are two private schools in Pomfret. Pomfret School (established in 1894) and Rectory School, which was established in 1921. Pomfret is also home to a 700-acre Connecticut Audobon Society wildlife sanctuary which provides miles of walking trails and a year-round nature center. 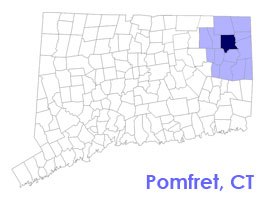 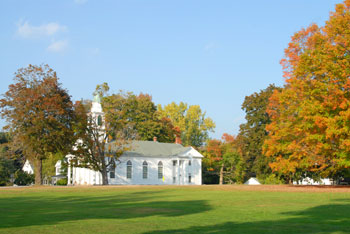