The Paugusset, an Algonquian people, once lived in the area that is now Orange. When originally settled by English colonists, Orange was simply the northern and eastern district of the now neighboring city of Milford, Connecticut; however, by 1822, the population of the area had grown to the point where residents desired to form their own separate community, thus forming the town of Orange.

The town is named after King William III, “Prince of Orange”. William is remembered for succeeding James II, deposed in the Glorious Revolution of 1688. James II had been considered a despot in Connecticut; he had famously and unsuccessfully commissioned Edmund Andros to seize Connecticut’s Charter.

The town continued to grow throughout the 19th century. As early as 1848, a separation of Orange and West Haven was considered. It was not until 1921 that the two were officially separated by an act of the Connecticut General Assembly and the new city of West Haven was formed out of the southeastern portion of Orange. This gave the remnant town of Orange a very rural feel, as the bulk of the urbanized population was ceded to West Haven. In the post-war years, however, Orange began suburbanizing at a rapid pace. 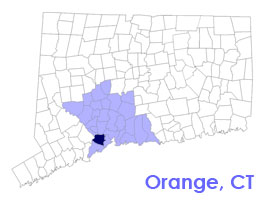