Norwalk was purchased in 1640 by Roger Ludlow. The original purchase included all land between the Norwalk and Saugatuck rivers and a day’s walk north from the sea. Norwalk was incorporated on September 11, 1651.

The traditional American song “Yankee Doodle” has Norwalk-related origins. During the French and Indian War, a regiment of Norwalkers arrived at Fort Crailo, NY, the British regulars began to mock and ridicule the rag-tag Connecticut troops who only had chicken feathers for uniform. Dr. Richard Shuckburgh, a British army surgeon, added new words to a popular tune of the time, Lucy Locket (e.g., “stuck a feather in his cap and called it macaroni”, macaroni being the London slang at the time for a foppish dandy).

British forces under General William Tryon arrived on July 10, 1779 and almost completely destroyed Norwalk; only six houses were spared. After the Revolutionary War, many residents were compensated for their losses with free land grants in the Connecticut Western Reserve in what is now Ohio; this later became Norwalk, Ohio. Norwalk was reincorporated as a borough in 1836, then reincorporated as a city in 1893 and was consolidated with the town of Norwalk in 1913. This latter event gave rise to the 1913 year that appears on the seal of the city. 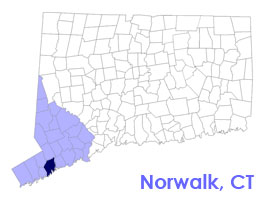