Newington was part of the Town of Wethersfield until 1871. Early names for the area were “Pipestave Swamp,” then “Cow Plain,” and later, “West Farms.” These reflected its use first as a source of staves for making “pipes” (large sized barrels) used in colonial trade, then a pasture for cattle, and eventually, the new farms taken up by descendants of early Wethersfield settlers who had been given grants on the western frontier of their riverside town. By 1721 there were enough new farmers on these grants to request that the General Assembly of the Colony of Connecticut give them the name “Newington.” This name means new town in the meadow.

Because most inhabitants were related to Wethersfield families, Newington accepted government by Wethersfield Town Meeting until 1871. But the railroad had come through Newington in the 1830’s and frequent, inexpensive transportation attracted growth. Some years later, Wethersfield Town Meeting refused to approve expenses for highway improvements for better access to the railroad. Newington was ready to take government into its own hands. It applied to the General Assembly of the State of Connecticut for incorporation, which was approved in 1871.

The trolley car and the automobile brought more growth early in the 20th century. Newington’s geographical location in the center of the state, plus great improvement in highways, attracted many new residents and businesses. The trolley was replaced by regular bus service along the same route. Commuting to Hartford and New Britain was convenient. By 1966 population increase had outgrown government by the town meeting and the Council-Manager form of government was adopted. 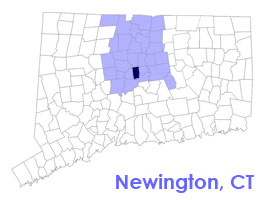