In 1731, Connecticut’s colonial legislature established Canaan Parish as a religious entity in northwestern Norwalk and northeastern Stamford. The right to form a Congregational church was granted to the few families scattered through the area. As inhabitants of Norwalk or Stamford, Canaan Parish settlers still had to vote, pay taxes, serve on juries, and file deeds in their hometowns. Because Canaan Parish was not planned as a town, New Canaan, when incorporated in 1801, found itself without a central common, a main street or a town hall.

Until the Revolutionary War, New Canaan was primarily an agricultural community. After the war, New Canaan’s major industry was shoe making. As New Canaan’s shoe business gathered momentum early in the nineteenth century, instead of a central village, regional settlements of clustered houses, mill, and school developed into distinct district centers. Some of the districts were centered on Ponus Ridge, West Road, Oenoke Ridge, Smith Ridge, Talmadge Hill and Silvermine, a pattern which the village gradually outgrew.

With the 1868 advent of the railroad to New Canaan, many of New York City’s wealthy residents discovered the quiet, peaceful area and built magnificent summer homes. Eventually, many of the summer visitors settled year-round, commuting to their jobs in New York City and creating the residential community that exists today. 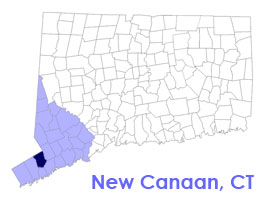