New Britain was settled in 1687 and was incorporated as a parish under the name New Britain Society in 1754. Chartered in 1850 as a township and in 1871 as a city, New Britain was separated from the nearby town of Berlin, Connecticut. A consolidation charter was adopted in 1905.

During the early part of the 20th century, New Britain was known as the “Hardware Capital of the World,” as well as “Hardware City.” Major manufacturers, such as The Stanley Works, Corbin Locks and North & Judd, were headquartered in the city.

In the history of the clothes hanger, this city ranks prominently as the place where today’s most used hanger, the wire hanger, was inspired by a coat hook that was invented in 1869 by O. A. North of New Britain, Connecticut. However, no monuments to either North or the wire hanger have been erected within the city limits (or the Stanley/Bailey plane, for that matter). In 1895 the basketball technique of dribbling was developed at the New Britain YMCA. 1954 saw the development of racquetball also at the YMCA. 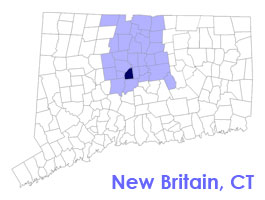