Naugatuck, Connecticut was settled in 1701 as a farming community in rural Western Connecticut. As the Industrial Revolution commenced, Naugatuck was transformed into a hardscrabble mill town like its neighbors in the Naugatuck Valley.

Goodyear Metallic Rubber Shoe Company & Downtown Naugatuck. Rubber was the chiefly manufactured product. The United States Rubber Company (renamed Uniroyal Inc. in 1961) was founded in Naugatuck in 1892 as a consolidation of nine rubber companies and maintained its corporate headquarters there until the 1980s. Their Footwear Division manufactured Keds “sneakers” in Naugatuck from 1917 until the 1980s. U.S. Rubber also produced Naugahyde in a Naugatuck factory, but it is no longer produced there.

Due to an increase in the price of sulfuric acid, which was needed for the process then used for reclaiming old rubber, the United States Rubber Co. formed the Naugatuck Chemical Company on June 1, 1904, and the company soon was in the forefront of the chemical industry in the United States. Naugatuck Chemical remained a subsidiary of the U.S. Rubber Co. until, under Uniroyal, it gained independence as Uniroyal Chemical Co. They moved their operations to Middlebury, Connecticut in the 1970s.

The Risdon Manufacturing Company, established in Naugatuck around 1910, began by producing safety pins. Local housewives and children were often hired to attach the pins to cardboard for an easy sale. Risdon became the manufacturer of total packaging for cosmetics, personal, household, and other consumer products, and home sewing notions such as common pins, needles, snaps, and other accessories. It is now the Crown Risdon Co., headquartered in Watertown, Connecticut. 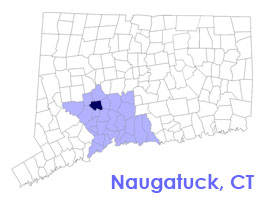