The Monroe Town seal is in the form of a circle with the words “Town of Monroe Connecticut” written in the outer rim of the seal. Inside this outer circle is a profile of a bust of James Monroe, who was the fifth President of the United States, serving from 1817-1825.

The very first Monroe settlers came to the area, the northern limits of what was known as Old Stratford, in the early eighteenth century because they were running out of farmland.

Each successive generation of settlers produced a larger population of farmers with a need for more and more land. Many of these settlers were second and third-generation Native Americans. Their founding ancestors had purchased, charted, and begun to lay out roads and clear land in the late seventeenth century. There are several towns that were established from the “Mother Town” of Stratford, or Cupheag, which was incorporated in 1639.

On May 17, 1671, Stratford purchased from the Paugusset Indians the territory which includes Monroe, Bridgeport, Trumbull, and Shelton, in what is known as “The White Hills Purchase”, and officially annexed it to the Township of Stratford. 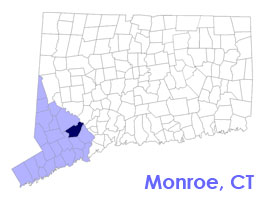