The land on the western bank of the Connecticut River where Middletown now lies was home to the Mattabesett Native Americans; the area they inhabited—now Middletown and the surrounding area—was referred to as Mattabesett. At the time the first European settlers arrived in the region, the Mattabesetts were a part of the group of tribes in the Connecticut Valley, under a single chief named Sowheag.

Plans for the colonial settlement of “Mattabesett” were drawn up by the General Court in 1646; the first Europeans arrived from nearby Connecticut colonies in 1650. Life was not easy among these early colonial Puritans; clearing the land and building homes, and tending farms in the rocky soil of New England was a labor-intensive endeavor. Law, too, was often harsh among the Puritans.

Pequot Mohegans, at that time traditional allies of the English colonists and enemies of the Mattabesett and other local tribes, arrived in the Middletown area in the latter half of the 17th century; conflict between them and local Native American tribes ensued. The Mattabesett and other tribes referred to the Mohegan as “destroyers of men.” Sowheag hoped that the colonists would intervene. They did not. Smallpox, too, afflicted the Mattabesett, significantly impacting their ability to resist and their cohesion as a tribe. Records show that, over time, Sowheag was “forced” to sell off most of the Mattabesett property to the local colonists; by 1676 the Puritans owned all but 300 acres of the former Mattabesett territory. Such was the fate of many New England Native American tribes in the late 17th and early 18th centuries.

During the 1700s, Middletown became the largest and most prosperous settlement in Connecticut. By the time of the American Revolution, Middletown was a thriving port, comparable to Boston or New York in importance, with one-third of its citizens involved in merchant and maritime activities. Today, the Center for the Arts and Wesleyan University are located here. Sections of Middletown include; South Farms, Bretton Heights, and Newfield Heights. 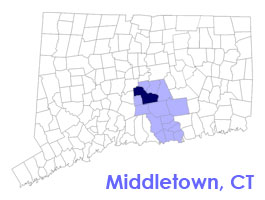