Middlefield CT was the hunting grounds of the Indian tribe which located its camp where Indian Hill Cemetery is in Middletown. Sowheag, the Sachem of Mattabassett, gave this land to John Haynes, the Governor of Connecticut. (A sachem is the hereditary chief of the highest rank in North American Indian tribes. Mattabassett is the Indian name for Middletown.

Middlefield is four miles from North to South and about three miles East to West, covering approximately 8,640 square acres. The first settlement took place about 1700 after Samuel Allen, Benjamin Miller, and Samuel Wetmore reached an agreement with the Indians during two campfire meetings.

Benjamin Miller settled in the south part of town near the Coginchaug Swamp. Thus, this became the site of the first home built in Middlefield and is on land now owned by Sarah Miller adjoining Julian Thayer’s farm. Samuel Allen settled in the northern part of the town. Today, the exact location is not known. Samuel Wetmore located in the center of town, opposite where the Methodist church now stands.

Middlefield was incorporated in 1744. The Congregational Church was formed in 1747, comprised of nine men and 24 women. The First Methodist Episcopal Church was built on land purchased from Samuel Birdsey and Elisha Coe about 1829. The present church stands on the original site. The Episcopal Church was built in 1862. The small membership was served by students of the Berkeley Divinity School, which was at one time located in Middletown.

Middlefield was at one time divided into four school districts–North, East, South, and Falls. All school buildings have since been converted into homes. The Falls (Rockfall) school was the largest with three classrooms. The teachers taught several grades in one classroom. In 1926, the four districts were consolidated into one, with classes being taught at the Center School. The school building, closed in 1981, now serves as the Community Center, a combined social and Middlefield Town office area. 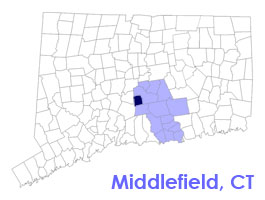