Welcome to “the Silver City” – Meriden, Connecticut. Meriden CT was originally part of Wallingford. It was granted a separate meetinghouse in 1727, became a town in 1806, and incorporated as a city in 1867. It was named for the town of Meriden, West Midlands, England. The oldest house in Meriden still standing, built by Solomon Goffe in 1711, is now a CT museum, the Solomon Goffe House. In the 1800s, Meriden earned the nickname “The Silver City,” due to the large number of cutlery and related products which were manufactured here by companies such as International Silver and Meriden Cutlery.

The Hanging Hills and Hubbard Park; Meriden below Charles Parker and his younger brother, opened their first manufacturing factory in Meriden in 1832, with a capital outlay of $70.00. Over the years they manufactured a wide variety of products from steam engines, train wheels and printing presses to piano stools. During the American Civil War Parker’s Meriden Machine Company was under Union contract to produce 10,000 repeating rifles and 15,000 Springfield rifles. Parker began producing his own shotgun, referred to as “The Gun of 1866”. In 1868, Charles and his sons, Wilbur, Charles and Dexter started the Parker Brothers Gun Company, which continued as an independent company until 1934 when it was purchased by the Remington Arms Company. 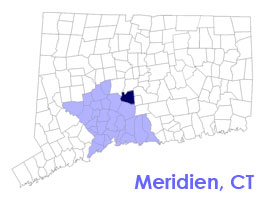