Incorporated in 1702, the Town of Mansfield was part of a tract of land acquired from the Mohegans by a group of settlers in Norwich. Most of the first settlers were farmers, and Mansfield has remained largely a rural town. Rivers powered sawmills and grist mills from the early days, and during the nineteenth century mainly textiles, but also steel products, bits and augers, bells, bronze cannons, gunpowder, and organ pipes, were manufactured in Mansfield. The first silk mill in the United States was built at Hanks Hill in 1810, and for many years, Mansfield led the country in silk production. 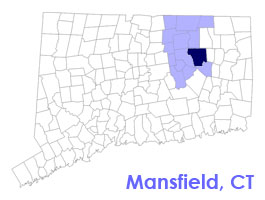