Founded in 1721 Litchfield was designated the county seat in 1751, and by the 1790’s the town had become the leading commercial, social, cultural and legal center of Northwestern Connecticut. Its population grew from 1,366 in 1756 to 2,544 in 1774, and by 1810 Litchfield was the fourth largest settlement in the state with a population of 4,639.

Beginning in 1784, Litchfield lawyer, Tapping Reeve, systematized his law lectures for young students, creating the Litchfield Law School. Reeve was the first to develop a series of formal, regular lectures that ensured that all students had access to the same body of knowledge. Established in 1792, Sarah Pierce’s Litchfield Female Academy was one of the first major educational institutions for women in the United States. Over its forty-one-year history, the school enrolled more than 2,000 students, established a national reputation, and evolved a highly challenging academic curriculum.

During its “Golden Age” (1784-1834) Litchfield had an unusual number of college-educated inhabitants. In 1791 Samuel Miles Hopkins, a student at the Litchfield Law School, described Litchfield in his journal as a town of “hard, active, reading, thinking, intelligent men who may probably be set forth as a pattern of the finest community on earth.”

Litchfield’s fortunes declined during the later years of the nineteenth century. The town did not have the ample water supply and rail transportation necessary to establish industry and the village became a sleepy backwater. Rediscovered as a resort community in the late nineteenth century Litchfield became a popular spot for vacation, weekend, and summer homes. The town embraced the Colonial Revival movement and by the early Century, many of the homes began to sport the white paint and black shutters we see today. 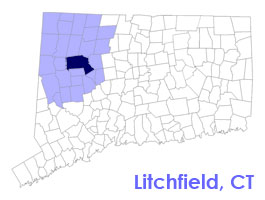