Killingly’s first known settler was Richard Evans, who came from Rehoboth, Massachusetts in 1693. In the early 1700s other settlers came, mostly from the Boston area. Killingly was incorporated in 1708. At that time its borders extended from Plainfield to Massachusetts and included what is now Thompson and much of Putnam. The town’s earliest establishments included taverns, blacksmith shops, grist and saw mills. By 1770, William Danielson, later a Colonel in the militia, had established an iron works on the Five Mile River in present-day Danielson.

In the late 1700’s, William Cundall established one of the earliest woolen works in Connecticut. Textile mills were built along the Quinebaug and Five Mile Rivers and Whetstone Brook in the early 1800s. In 1836, Killingly was considered the greatest cotton manufacturing town in Connecticut.

Railroad access in 1840 made the town a commercial center for the region. Immigrants from Quebec, and later eastern and southern Europe, came to work in the mills. In the early 1900s many textile manufacturers moved south, where labor and operating costs were lower. 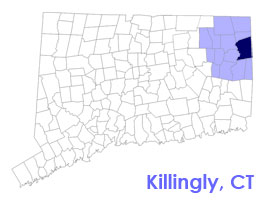