The Town of Groton Connecticut lies on Fishers Island Sound between the Thames and Mystic Rivers where from times past its rugged hills and lush green woods have sloped down to sandy beaches and rocky shores. When Dutch explorer Adrian Block charted the coast in 1614, this was the stronghold of the Pequot Indians, the dominant native tribe, who were displaced in 1637 when Captain John Mason led a punitive expedition against their Mystic fort.

Nature's Campsites, 96 Ekonk Hill Road, Voluntown, CT 06384 | 860-376-4203
Natures Campsites were established in 1972 as a beautiful gateway where families could come and enjoy the scenic ambiance that this campground has to offer. Nature’s Campsites has a courteous staff, spacious sites, and an outdoor experience that is real and available for you to enjoy from May 1st to October 15th. Amenities include on-site Laundromat, Swimming Pool, Wi-Fi Hotspots, Basketball Courts, and Playground.
Visit Nature's Campsites - Voluntown, CT

Groton was settled by Europeans as part of New London when John Winthrop, Jr., came from Massachusetts Bay in 1646 to found Pequot Plantation at the mouth of the Thames. By 1705 the population east of the river had increased sufficiently for the General Court to allow the inhabitants to incorporate as a separate town, which they named Groton in honor of the Winthrop estate in England.

Early settlers were primarily farmers, but they turned early to shipbuilding and the maritime trade to supplement their livelihood scratched from the rocky soil. Groton vessels traded with Boston and New York and soon found their way to the West Indies and across the Atlantic.

During the American Revolution, the town was active against the tyranny of King George, sending out privateers to prey on British commerce. Perhaps in reprisal for their success, superior troops led by the traitor Benedict Arnold attacked Fort Griswold on Groton Heights Sept. 6, 1781. The one-sided battle ended with a dreadful massacre of the brave American defenders. The site is marked with a 134-foot monument and is now Fort Griswold Battlefield State Park.

After the war shipping and commerce boomed, and mill wheels turned on every stream. Groton seamen sailed to the ends of the earth hunting seals and whales. Major shipyards developed. At West Mystic, Maxson & Fish built clipper ships and the Civil War ironclad Galena. After the war, in 1868, a Navy Yard was established on the Thames River, which during World War I was officially commissioned as a submarine base.

Groton became known as the Submarine Capital of the World when the Electric Boat Division of General Dynamics delivered 74 diesel submarines to the Navy in World War II. This was followed in 1954 with the launch of the USS Nautilus, the world’s first nuclear-powered submarine, now permanently berthed at Goss Cove near the Submarine Base. 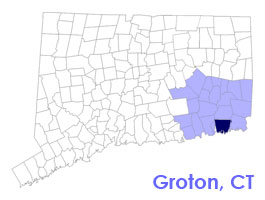 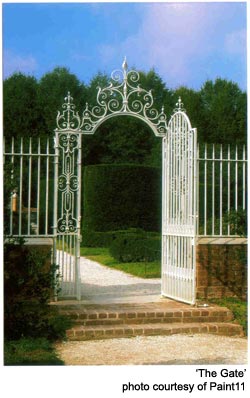