Goshen, the next town to the south best reached from Norfolk by way of Torrington, was auctioned at New Haven in 1737, bids starting at the high mark of L60 per right.. The land was considered desirable, and the settlers who arrived in 1739 were largely the original purchasers. They came for the most part from New Haven, Wethersfield and Farmington. Town privileges were granted the same year. The name of the town was taken from the Biblical land of Goshen. It is a high hill country, most of it well above 1000 feet elevation.

Goshen was famous as a grazing country. In 1792, Alexander Norton bought local cheese to sell in the South, whither he had been ordered for his health. He continued in the business, packing first in hogsheads and later in round boxes that held two kinds of cheese. His second cousin, Lewis M. Norton, invented the pineapple cheese, securing a patent for the form in 1810; he made cheese from his own herd of 50 cows until 1844 when he began buying milk from other farmers and established what is believed to be the first cheese factory in the country.

Before the middle of the century, Litchfield County was making nearly 3 million pounds of cheese a year. From Connecticut, the industry spread to the West, especially Wisconsin. “The Connecticut Yankee brought a cheese hoop with him and wherever he went he made cheese.”

To share any Goshen, CT information with us, please contact us. Learn more about advertising in CTLiving. 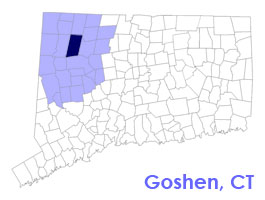