In 1659, settlers from Old Saybrook founded a colony in the Mohegan Indian Territory. The original nine-mile tract was purchased from Chief Uncas and his brother Wawequa for 70 English pounds. This area included within its limits the present towns of Norwich, Franklin, Bozrah, Lisbon and Sprague. In 1663, settlement began in the section of Norwich known as “West Farms” and by 1710 there were more than 50 families in the town.

In 1716, Norwich granted the people of West Farms permission to form a separate Ecclesiastical Society. At that time, the town included most of the present-day town, the western half of the present town of Sprague, and the eastern part of New Concord, afterward known as Bozrah.

In 1718, on the occasion of the ordination of Rev. Henry Willes, Franklin Congregational Church was organized. It was then decided that schools were also needed and one was built on Meeting House Hill. Due to the New England weather and the importance of the children’s roles in their family farms, school was held six months out of the year.

The students who lived distant from the school complained of the long walk to the school. And so, in 1727, the town of Franklin voted in four school districts: Portipaug*, Upper Windham Road, Lower Windham Road, and Lebanon Road. But the population was too scanty for the maintenance of separate schools, and the divisions remained inoperative until 1729. At that time, it was decided that the school should travel from district to district, holding classes for six weeks in each. This migratory school proved a complete success. The town of Franklin was incorporated in 1786. 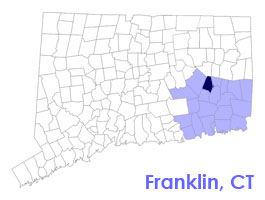