Welcome to scenic Easton, Connecticut. The area occupied by the town was originally inhabited by the Nehantic Indians who maintained villages in the modern day Indian Woods section as well as on Black Point, McCooks Beach area and near the Niantic River. The tribe allied itself with the colonists in the 1636 war against the Pequot Indians the Nehantic eventually died out in the mid 1800s. The 1750s Ezra Stiles map shows the village in modern day Indian Woods of the Nehantic people as was described as “12 or 13 huts”.

Easton, then a part of Lyme, had several taverns which offered stopping places for travelers such as Sarah Kemble Knight. These included Calkins Tavern on modern-day Boston Post Road, Royce’s Tavern, and Taber Tavern near modern-day I-95. No less than 23 Revolutionary War Veterans are buried within the borders of Easton and countless more are found resting places in upstate New York, New Hampshire, and Ohio. Moses Warren, along with General Samuel Holden Parsons originally of Lyme, and Moses Cleveland set out to survey the Ohio Territory in the latter part of the 1790s and has Warren County, Ohio named after him.

The town of Easton consists of two villages, the Village of Flanders, and the Village of Niantic. It is common for the town to be erroneously called Niantic, due to this side of town being the “beach” side which is popular with tourists and visitors in the summer months. Niantic’s population doubles in the summer months for the beach season, and it’s a much higher density than the more sparsely populated Flanders side of town, which is known for its apple orchards, the town’s high school, and forest. Easton remains a beautiful and rural part of Connecticut. 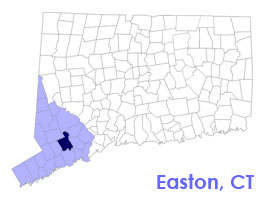