Welcome to historic East Hampton, Connecticut. The first settlers of the area arrived in 1739 by sea from Eastham, Massachusetts. They traveled up the Connecticut River to Middle Haddam parish between the two adjacent towns of Middletown and Haddam Led by Isaac Smith, some of these settlers went on to the hills near Lake Pocotopaug, the present-day location of East Hampton. In 1746, the settlers named their community Easthampton parish after their former home of Eastham.

In 1767, the community was separated from Middletown incorporated by the Connecticut General Assembly as the township of Chatham, after Chatham, Medway due to the important shipbuilding industries that both places had in common. In the 1800s, East Hampton became the center of the manufacturing of bells, with the first factory being constructed in 1808. During this period thirty firms were known to have built and ran factories producing these bell products.

The four most prominent are Bevin Brothers Manufacturing Company, Starr, Hill, and Gong Bell. In 1841, the East Middletown parish, which had been a part of Chatham, separated and became a new township called Conway (later renamed Portland). Chatham was renamed East Hampton in 1915, which had long been a second name for the township.

The name “East Hampton”, however, is confusing, since the town is many miles southwest of Hampton, Connecticut. The bell companies that dominated the economy of East Hampton continued to flourish until The Great Depression. Today the only remaining company is Bevin Brothers Manufacturing Company, at a much-reduced scale. Many of the brick factories from this remain untouched in the center of the town while others have been converted into offices, stores, and other small businesses. 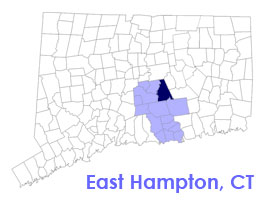