History of CT – The Constitution State

A brief history of the State of Connecticut. Other popular notations for Connecticut include; CT, ct, Conn, CONN., The Nutmeg State, The Constitution State. The word Connecticut is derived from an Indian name in a reference to the mighty Connecticut River, which empties into the Atlantic Ocean near Old Saybrook, Connecticut. To feature your Connecticut Business, contact us. 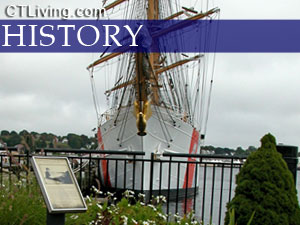 The earliest inhabitants of the Connecticut area came over the Alaskan land bridge and settled in the east. These people were nomadic, they moved around following herds and gathering food. As time went on a diverse group of people came to inhabit the land. Upon European arrival seven known tribes including the Mohegan and the Pequot were already settled the area. The state’s name came from the native word Quinnehtukqut, meaning “ the long river place” or “beside the long tidal river”.

The first explorer to document the area was a Dutchman by the name of Adriaen Block. It didn’t take long for other Europeans to want to settle the area. The Connecticut Colony was built in 1630. The settlements of New Haven, Saybrook and Windsor soon followed it.

The relationship between the new settlers and the Natives was not in good shape and the colony went to war with local tribes in 1636. After the initial dispute with the tribes, many people began to move into the river valley settlements and the shore. But relocating was tightly confined. The Colony didn’t spread until the natives, outnumbered by immigration and disease, left the area.

When the idea of Independence took hold of the colonies Connecticut was considered a loyalist supporter. But the introduction of the Stamp Act, the rise in sugar prices and English taxes caused the colony to join the revolt against the crown. Connecticut’s Navy was responsible for the capture of over 40 British ships and their legal pirates brought down over 100.

The Connecticut delegates were crucial to the development of the U.S. Constitution. The Fundamental Orders that the colony and New Haven settlement had drafted are considered the first constitutions in America and it was the ideas from these that the delegates brought with them to the Constitutional Convention. Connecticut became the fifth state to join the union on January 9, 1788. Hartford became the permanent residence of the capital in 1875.

Connecticut has always been famous for its industry. In colonial days the shoreline, brass work, and farming became the basis for the state’s industry. The civil war expanded this industry with the introduction of the railroad and banking. The state has introduced the world to vulcanized rubber, steamboats, and mechanical calculators. Today Connecticut has preeminence in the field of transportation production, it is the home of businesses like Xerox and G.E, and has a huge insurance market – especially in Hartford, which is referred to as “the Insurance Capitol of the World.”.

Tourism is also a big industry for the state of Connecticut. The state has great opportunities for golfing, boating, fishing and many other outdoor activities. There are dozens of state and town-owned public hiking sites in every region of this southern New England state.

Colonial homes, historic landmarks museums, theaters, operas and ballets are also dispersed throughout the state giving tourists the best of both worlds.