Connecticut is one of the oldest states in America, making it the birthplace of many inventors and early leaders. There are also many musicians, actors/actresses and politicians from Connecticut, including the Actor Ernest Borgnine.  To suggest another famous Connecticut celebrity or historical figure, please contact us.

Ernest Borgnine, a famous Connecticut person passed away July 8, 2012 at the age of 95. Borgnine was born Ermes Effron Borgnino on January 24, 1917 in Hamden, CT. Borgnine lived in Hamden, North Haven and New Haven. He attended Hillhouse High School in New Haven. Borgnine was an American film and television actor whose career spanned more than sixty years. Ernest Borgnine was an unconventional lead character. He won an Oscar in 1955 for his performance as Marty – from the movie of the same name.

In the early 60’s Borgnine starred as Quinton McHale in the 1962–1966 TV series McHale’s Navy. Borgnine appeared in dozens of movies and TV shows including; Airwolf, The Dirty Dozen, and many others. In addition to a wide variety of acting roles. Borgnine was also known for his role as Mermaid Man in the animated television series Spongebob Squarepants. He earned an Emmy Award for his work on the series ER.

Borgnine spent his youth in Connecticut and attended North Haven public schools. Borgnine took to sports but showed no interest in acting. He joined the United States Navy in 1935, was discharged in 1941, and re-enlisted after Pearl Harbor, to serve a total of ten years.

A street in Hamden, CT was named in Borgnine’s honor. For three decades (1972–2002), Borgnine marched in Milwaukee, Wisconsin’s annual Great Circus Parade as the “Grand Clown”. Ernest was also a Freemason. He received his 50 year pin at Abingdon Lodge in Virginia in 2000. 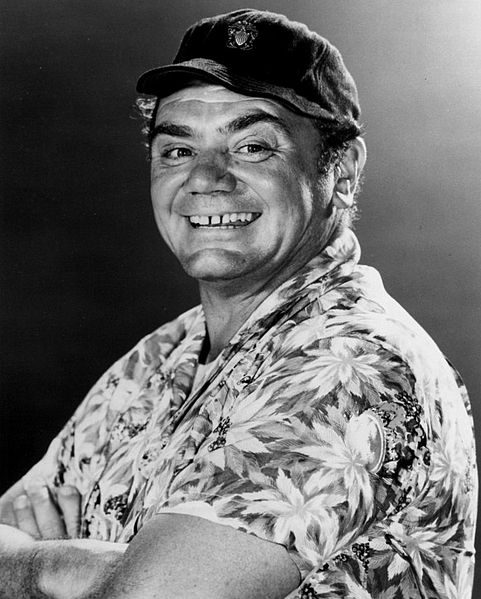